Eric O’Grey has had his life changed forever, again. Eric is a very passionate plant-powered athlete, animal rights activist, and motivational speaker and he has one of the most incredible stories of transformation that I have heard. It all began when he was at the doctor and was told that he needed to either make some very difficult changes in his life or he was going to die. He had diabetes and was more than 140lbs overweight. He decided he wanted to live and so he connected with a naturopathic doctor who told him he needed to adopt a dog before anything else. 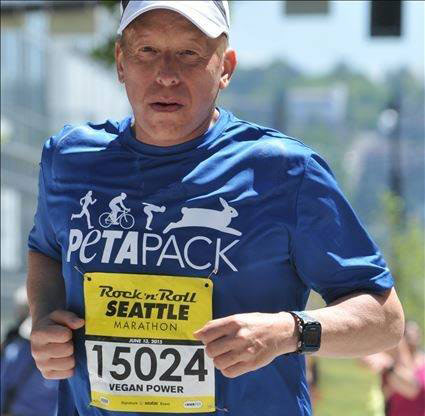 Eric went to the shelter and met a dog named Peety who was about to change Eric’s life forever. Over the course of 10 months, Eric began to walk regularly and eat a plant-based diet. He had more energy and felt better than ever. He then went on to start running marathons, which he has since completed over a dozen. His story has been featured in countless online publications including the Forks over Knives website and Oprah Magazine’s website.

In January of 2016 he moved to Spokane he was asked to do a short length film for the Humane Society of Silicone Valley. The video was released on Valentines Day of this year and had an immediate success with over 300,000 views in the first week. We talked about this incredible turn of events and he was elated by how much this story touched people.

Well on March 6th everything in Eric’s world was rocked again. The San Francisco Gate released the same video again. Most of their videos get about 10-20k views max. Within a single day Eric and Peety’s Mutual Rescue video had over 3,000,000 views! As of writing this 3 days later it has surpassed 14 million views! How incredible is that. Looking at the video I see most of my friends and family, some who live clear across the country, have liked this video.

Eric & Peety (from Humane Society Silicon Valley)Eric weighed over 300 pounds, had type 2 diabetes, high blood pressure, and his doctor told him he would be dead in 5 years unless he changed. They suggested a dog. Eric went to the Humane Society Silicon Valley and said he wanted an obese, middle-aged dog, so they would have something in common. What happened next transformed their lives.

Since the 6th Eric has had his video featured on BuzzFeed which cut the video up and wrote it out for people who prefer to read instead of watching a video and then the Huffington Post picked it up too. Eric has got a book agent and there are talks of a book deal and possibly a series of cookbooks revolving around the memory of Peety, the vegan wonderdog! He has been interviewed constantly and will be featured in Runner’s World in about 3 months!

I have to say all this success could not happen to a more incredible man. I am proud to know him and I am so excited for all of the incredible things that will lay in his future. Eric and the memory of Peety are going to help change the world.

If you have a similar story of Mutual Rescue please visit the Silicone Valley Human Society website to share it.