Yesterday, I visited one of the radical flea markets, the Oldsmar in Tampa, Florida. I had not been to a flea market in many years, since I visited my best bud Nick in Mexico in 2013. This tidbit is important for the story. Throughout the day, I saw all sorts of wares, trinkets and even a bulk rock shop. There was plenty of “drain the swamp” clothing and banners giving me the sense of being in another world. I picked up a useful money clip after wanting one for years & some delicious local oranges which I ate at last night at midnight. When I was about to the end of the market I came across a section that looked like a junk store. Appliances, stacked on dinnerware and mattresses to the ceiling. About 20 feet in I uncovered this stack of heavily used games and in the middle of the shop was one of my favorite games Scattergories. The box was in horrible condition but I realized this was one of the older versions which included nice holders for the cards. When I opened it, I found the contents in pristine condition. This version is very rare today so I was excited.

I started to look around to inquire what the price was for this item, as there was no price on the box or on anything in the shop. As soon as I began looking for help, I saw a guy carrying a queen size bed down the row. He looked at me and I could sense he was the owner, so I asked if he worked here. He said yes and I asked how much for the game. Make me an offer was his reply.  “$3?” I asked. “Sure” he said. He was long down the row by this time so I hollered, where do I leave the money? He asked me to follow him.

We moved into a tight cornered room where he stashed the bed against some more beds. I pulled out my wallet and the 3 dollars caught on to my 200 peso note which I have been carrying in my wallet for now 4 years. It was the last 200 peso note I had from my trip to visit my best buddy for his big 30 birthday. I told myself I would keep it in my wallet until I returned to visit him again in Mexico. Well for the first time ever, someone asked me about the foreign currency. I shared the story about Nick’s birthday, I left out the part where I popped out of a box in nothing but boxer, socks and a pink afro wig.  His response was. “My god, you could not pay me to go to Mexico.” I asked why that was. He then went on a list of anti-Mexico propaganda that he had heard which had made him incredibly fearful of Mexico and Mexicans. It was mostly about drugs, and crime. 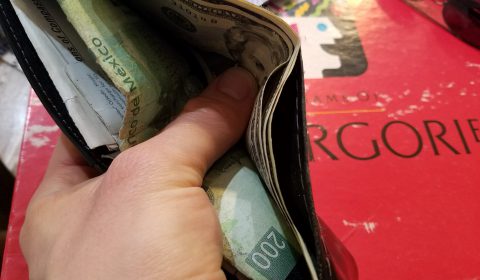 I shared my experience how Mexico is incredibly beautiful and full of truly amazing people. How I was able to walk through the “slums” of the town and feel totally safe, more safe then often I feel in Spokane at night. The people there are so loving and kind. How crime is actually quite low in many parts of Mexico. The main areas that people need to be cautions is the boarder cities and then Mexico city. Other then that there are plenty of beautiful areas which are just as safe as the US. During this he started to attempt to jest about The Wall. He joked ” Who is going to pay for it?, They are! You know that right?” With illogical comments like that, I honestly have no clue how to respond but I could tell that my experiences were slowly breaking down so many myths in his mind. Years of hatred and anger towards a country and race which he knew nothing about was slowly diminishing. He then shared with me how he had done multiple tours in Iraq and he had experienced the same thing. That most of the people in the countries he visited were truly amazing & incredible people. Full of love and soul.

Over the next few minutes we talked about life and understanding for other cultures. I left the shop knowing I had touched this man’s life and gained a copy of one of my most beloved board games. Breaking down what separates us from each other is the only way to find more peace in the world. Feeding into the false fears does only hurts us. Letting go of fear will set us free! It was truly a great moment in time. I never expected that 200 peso note would strike up such an incredible conversation. It clearly was the universe directing the situation 🙂