But What About Protein? Reply #10234 to this question. 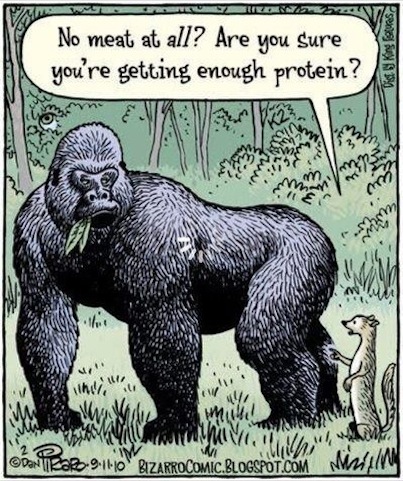 A man wrote this to one of my female friends on facebook: “Also all proteins are definetly not the same 🙂 ”

This was after arguing with her that animal proteins are superior in all ways for 30 minutes. She then asked me and another friend to jump in to share our thoughts.

Here is my response to him:

Actually they are and they are not. A specific amino acid is the same across the board. This is a part of another complex myth in the belief that there are some sort of superior proteins. Protein is simply a mixture of 9 essential amino acids. Eating what is considered “complete” protein is actually not good on the body because it leads to malnutrition.

If you survey our modern America you will see how this malnutrition manifests itself. Humans eating a diet of more than 15% protein have a much higher rate of obesity. This is a direct correlation and the obsession on protein by doctors and most of America has driven us into our obesity outbreak.

Back to the “complete” or “Perfect protein” and why it does not exist. This is because each amino acid is not equal. Each has a different energetic charge and so only the most powerful 4 amino acids of the 9 in a “complete protein” food actually get absorbed by the body. What is more healthful is eating a wide variety of amino acids through out the day(eating the rainbow) which will lead to an every healthier body. The lady who wrote the book on the “complete” protein in 90s has been recanting her research because it was severely flawed. That does not stop people from using the flawed data to this day. Plants provide every single amino acid and in surplus, this is why you do not ask the cow, sheep, goat, elephant or any other herbivorous animal where they get their protein. Even though the corporate food system has told us other wise since the 1970s, humans require so very little protein. The body needs less than 5% protein to maintain their current healthy muscle mass and that is why it is recommended to eat a diet consisting of 10% to maintain and increase if needed. Plant-powered body builders and athletes such as David Carter(300lb Vegan), Ndem Nkem, Rich Roll, Patrik Baboumian(one of the worlds strongest men), and so many others have realized this an seriously reduced their protein intake to keep their body in top shape. Eating a wide range of foods keeps you in a good balance of amino acids like I mentioned above. Below is an excellent book on the subject by one of the foremost doctors on the subject Dr. Garth Davis. He is a weight loss surgeon from Texas and he knows his shit! 🙂

I honestly do not understand why men belittle women so much relating to this question and about health. One average I would say women normally are much smarter when it comes to food choices and their health. Maybe it would be a good idea to not argue as much with them. 🙂